I’ve always disliked the standard choke set up on the Lambretta and often resort to using the flip-up choke, but this isn’t always feasible, so back in 2012 a friend, Jarv from Norwich showed me his thumb choke set up on his Lambretta Special. I already found a lever from a lawnmower, but wasn’t happy with it. Then I saw Darrell Taylor from Taylor Tuning had built a thumb choke. Everything was with the kit, cable, fixings and lever. So I went with Darrell’s kit. 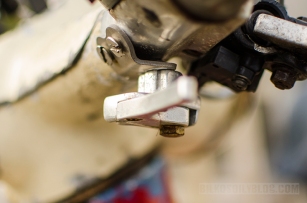 It works perfectly and because of its position, it can be safely used on the go to richen the mixture if the engine starts to overheat.

Update 16/11/16: I was out on the LI today and had a chance to run it over half throttle. The EGT temperature was climbing quite high over 600c so pushed the choke in with the thumb and the temperature dropped very quickly So I was able to keep the engine cooler. Without the aid of an EGT gauge and thumb choke I would quite probably have wrecked the top end today. So, I will go over the jetting and check for any issues with the engine over the next few days. 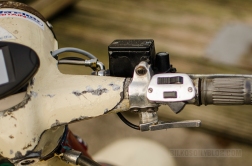 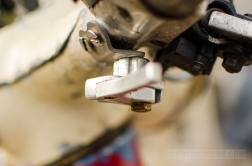 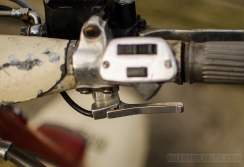 Below is the information Darrell gave regarding the thumb choke.

Background
Around 12 years ago I started racing 2 strokes again in endurance racing events that I once did at 17 many, many years ago, I always used remote handlebar chokes as they are a device I used to great effect as a tuning tool.
Having dialled in the jetting either on the dyno or at a previous track with ever changing conditions and in 6 hr endurance racing events the jetting changes considerably, if it changed for the worse you can end up running lean, so having the handlebar choke allowed us to richen up the jetting and cool off the motor when temp rose too high to avoid engine failure.
prior to a race in practice I would engage the choke to see if it 4 stroked(too rich) or if it went a bit better with the extra fuel (too lean/or too hot) depending on how it behaved along with barometric checks I would make jetting changes to get the best out of it, with a marked off throttle the test can be easily applied at different throttle positions.

1 To help set up jetting.
2 If you suspect a fault, faulty ignition, dodgy fuel, air leaks, blown gaskets, blocked jets to richen the jetting and make the engine safer.
3 Use on extended distance hard riding to cool the motor/enrichen.
4 easy starting adjust throttle and choke instantly.