For a number of years, I’ve got along stripping & building my Lambretta engines with the usual huff and puff when I always have to turn the casing around, working on different parts of the engine.

Apart from when I had big enough space to build my own workshop to store and work on my Lambrettas, I’ve always found it difficult to utilise work space for a workbench, but recently I built a small bench on wheels that I can use for working on my Lambretta engines.

So with this I was looking for an engine stand that was suitable and there’s now a few to found. I was aware of John Betts of JB Fabrication and his work and when I found he was making the engine stands, it was the obvious choice for me as he has a reputation for quality workmanship and innovative.

Fixing to the workbench is simple. Two bolts through the holding bracket to the bench, but make sure the bracket that holds the engine has space to rotate and protrudes from the work bench an inch or two. (see images at the bottom of the page). The longest bolt holds the two pieces together and as previously stated, the short Allen bolt keeps the holder in any one of 8 positions.

When fitting the engine to the stand, the rear shock bar goes through the hole and the engine mount goes over the other side. Then fit the engine bar through. Make sure you fit the necessary nuts for added safety. You’ll notice in the images I didn’t use nuts as the engine fitment was for photographic purposes only.

All I can say is this makes all the difference and everything is far easier when building a Lambretta engine. The 8 positions mean that you can do just about any work on the engine without the hassle of tipping the engine or having to stick something underneath to support it and no more nipping fingers turning it over.

JB Fabrication also sells these with a bracket that bolts the stand to a wall.

Jon’s work doesn’t limit to Lambretta tools and Lambretta fabrication work. He also does a wide range of work for cars and bespoke parts. 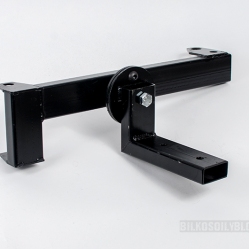 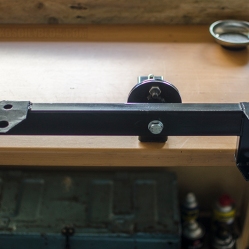 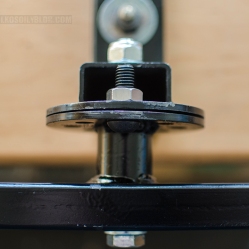 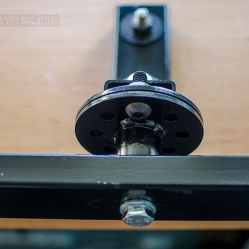 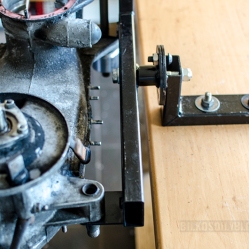 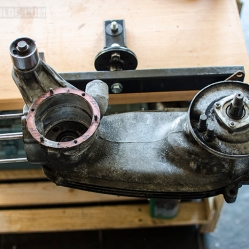