Two quotes from Social Media. One is sensible.

Contrary to what some people may think, a leak down test can be one of the most important jobs to carry out on a Lambretta. It will expose any leaks around the cylinder or cylinder head, mag housing, inlet manifold, exhaust port and both mag side seal and drive side seal. Any leak from these areas can make correct jetting and set up almost impossible and may lead to serious damage to your engine.

I was introduced to the leak down test by Darrell Taylor of Taylor Tuning through a couple of social media outlets. Up to this time I wasn’t aware such test existed, let alone anything for a Lambretta.

I’ve battled jetting on many occasions and one particular time that stands out was when I was trying to jet my 250LC. Rich low down, lean on high revs. Whatever I tried, I just couldn’t get the jetting right. The fault was only discovered by Alan Terry of Diablo Moto, on my way to Mersea Island Scooter Rally in 2012. There was a crack at one of the barrel studs on the casing, causing an air leak. This ended the journey.

A leak down test on the engine build would have spotted this.

So, fast forward to 2016 and I purchased one of Taylor Tunings leak down test kits as well as a blood pressure gauge.

Darrell Taylors Kit comprises of various bungs for various sizes of inlet manifolds and round and oval blanking plates & rubbers for the exhaust outlet. You can also buy an upgraded version that includes a pump, but as I already had the blood pressure gauge, I didn’t need it. 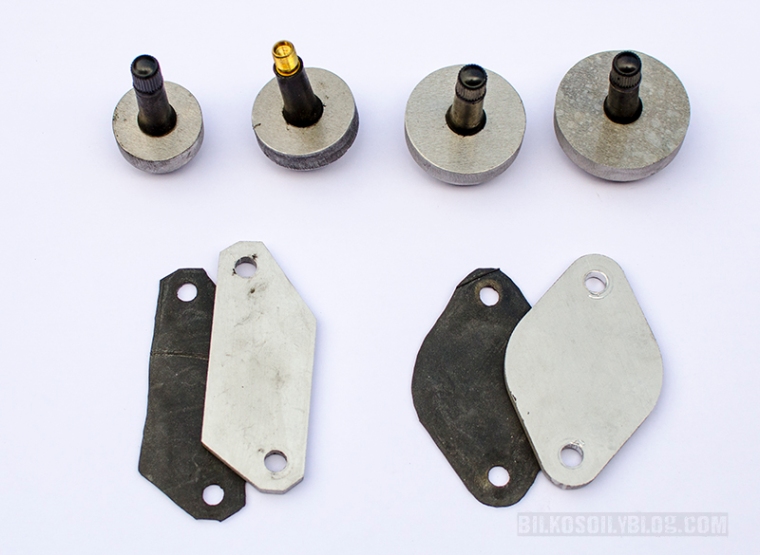 I’m currently building a TS1 230 engine and it was time to do the leak down test. Using Threebond on the gaskets, the first test was done with the pressure pumped up to approximately 300 mmhg or 6PSI. The gauge was dropping very slowly at 1PSI over two minutes. I could have let this pass as acceptable, but I couldn’t find the source of the leak so didn’t want to leave it. A brief conversation with Colin Jenkins and he suggested Drive side and mag side oil seals. He was right. A squirt of soapy water revealed the Drive side oil seal was the culprit leaking.

Replacing a drive side oil seal isn’t the easiest repair on a roadside, so I took the top end apart and put in another seal. The air pressure held held this time. 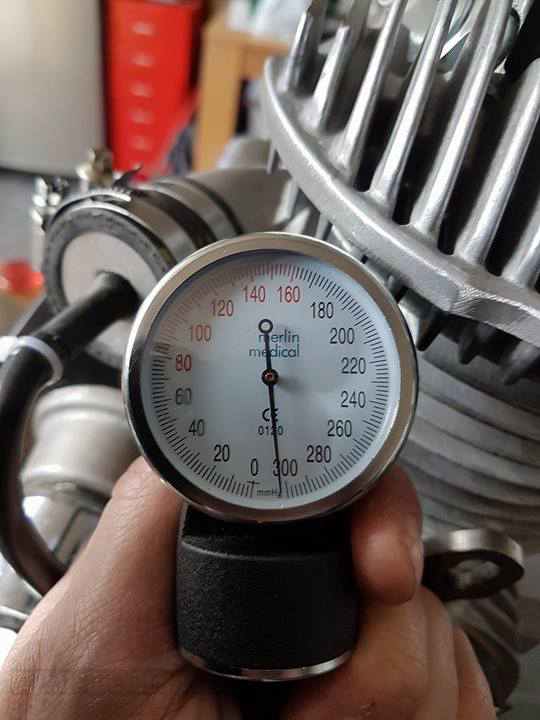 One good point Darrell recommends with any engine failure, always get a Leak Down Test done before stripping the engine.  This will save time and money and may point you to the source or cause the failure!

Benefits of a Leak Down Test:

This test will help find the potential problem rather than trying to find the problem of a leak without knowing it’s source, which in turn could lead to a wrong diagnosis, causing further engine trouble.

The leak down test gives you confidence with your engine build.

It should also be used to find the cause of an engine component failure, again with a better chance of finding the real cause rather than a guess.

So why wouldn’t you? Nearly all good quality engine components are not cheap, so it pays to protect the engine. 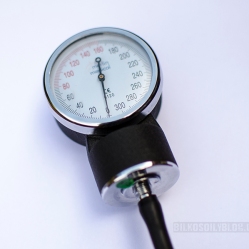